The Politicization of Justice: How An Antifa Axeman Got Scot-Free After Vandalizing U.S. Senate Office 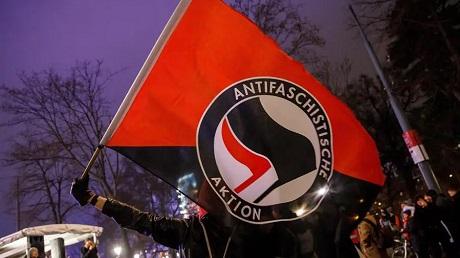 The Politicization of Justice: How An Antifa Axeman Got Scot-Free After Vandalizing U.S. Senate Office.

The Antifa activist who tried to break into the North Dakota senator’s office in Fargo with an ax went virtually unpunished and was embraced by members of the Democratic Party.

Democracy, that expression of popular sovereignty within the framework of a republic, categorically, necessitates the rule of law. When equality before the law is trashed, free societies run amok. The case of Thomas Alexander Starks, an Antifa member of Lisbon, North Dakota is a case in point that highlights how different shades of justice are being applied in America’s justice system.

On December 21, 2020, Starks attempted to violently break into the office of Republican Senator John Hoeven of North Dakota, using an ax. This terrorist act was captured on CCTV film. The Antifa associate pleaded guilty in federal court on April 19, 2021, to the charge of destruction of Government property. This followed an investigation by the FBI, U.S. Capitol Police, Fargo Police Department, and the Cass County Sheriff’s Office. Despite the conclusive evidence in this case, as well as the aggressor’s admission of culpability, mandatory prison sentences for crimes such as this were not applied to Starks.

Federal guidelines required the Antifa operative to spend a minimum of ten to sixteen months in jail. Instead, the ax-wielding far-left subversive received only a probation order and a restitution fine of $2,784. No prison time was levied upon the North Dakota extremist. How could this travesty of justice have occurred? The question raises the point that, in fact, ideological factors now appear to guide a two-tiered judicial system.

There are government property destruction charges pending against Americans who were involved in the January 6 Capital Building incident. They are being held in the District of Columbia’s jails. Many, if not most, have been subjected to harsh prison conditions such as solitary confinement and other cruel punishments that would not meet international human rights standards. This moral contradiction reflects an ideological prejudice that favors those that break the law and adhere to worldviews to which the Left subscribes. When one considers how today’s Democratic Party, the Biden-Harris administration, mainstream media, and the woke oligarchic class have maliciously labeled the Capital Building transgression an “insurrection”, we realize just how far the Marxist postmodern perversion of language and concepts has gone.

Most of the January 6 intruders are guilty of illegally trespassing. A much smaller group face charges for destruction of Government property. No one has been charged with sedition. Not a single person was found to be carrying a weapon. The hypocrisy is grandeur. Yet, the outrageousness of this episode does not stop at the narrative the left wishes to convey. The U.S. justice system is witnessing serious cracks in its capacity to afford due process on an equal footing and render verdicts that are worthy of the rule of law.

The Antifa activist who tried to break into the North Dakota senator’s office in Fargo with an axe, not only got away virtually scot-free but also received support from Democratic Party members of his state. The North Dakota Democratic-Nonpartisan League Party, the local affiliate of the national Democratic Party, had its Chairwoman Kylie Oversen, Party Executive Committee Representative Ellie Shockley, and the nominee for lieutenant governor in 2012, Ellen Chaffee, all financially contribute to Starks’ defense fund.

Being a proud militant of the domestic terrorist group was something Starks never denied. Neither did he obscure the intent to wage war on “fascists” (really anyone who is not a socialist) and “hunt” them down. The Antifa subversive talked about committing arson and even brazenly bragged about how the FBI returned his axe, the very weapon he used in the crime. Where was Facebook’s “Community Rules”?

A member of an antisystem domestic terrorist group, which together with Black Lives Matter, waged a violent revolt against the American Republic in the Spring and Summer of 2020, committed a crime against a government building, which supposedly carried a federally mandated sentencing requirement. Probation and a petty fine were all that was levied. Additionally, the Antifa axman from North Dakota let the world know, in plain social media sight, where his psychotic mind was at all along. While this happened, the American Left’s equivalent of political prisoners, the January 6 defendants, are being mauled judicially. This is a grave afront to justice and undermines the republican model of government.{/hide}