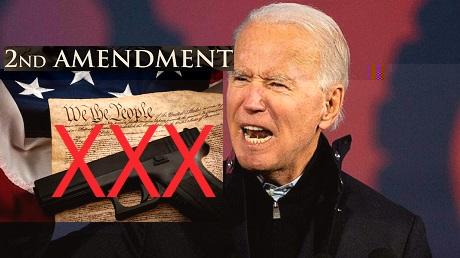 The portion of the statement that mentioned the “stabilizing brace” is a reference to AR and AK pistols.

Such weapons have barrels that are shorter than the minimum 16 inches required by the National Firearms Act (NFA).

The statement said that pistols with an arm brace are “concealable.”

However, such a claim doesn’t really mean anything, legally speaking, and is also laughable to most gun owners since many AR pistols are more than 2 feet long.

The claim that weapons with a pistol brace will be “subject to the requirements of the National Firearms Act” means that gun owners will likely be forced to pay a $200 tax stamp on those firearms.

The move essentially amounts to singling out and taxing a group of people who are serious Second Amendment advocates and are largely opponents of Biden and his policies.

The statement said that the administration was “investing in evidence-based community violence interventions” in “urban communities.”

The administration admitted that cities across the country, which are largely run by Democrats, are seeing a historic spike in homicides.

However, the surge follows the push by some Democrats and far-left activists to “defund the police.”

The statement said that the Justice Department would release an annual report on firearm trafficking.

Finally, the administration announced they will nominate David Chipman to serve as director of the ATF.

Chipman worked at Giffords, which advocates for gun bans.

Chipman responded to the announcement by locking his Twitter account so people cannot see what he has stated publicly.

However, a comparison of online archives to his current account appears to show that he has deleted well over 1,000 tweets.

Biden’s new actions run contrary to his pledge to unite and heal political divisions in the country as tens of millions of law-abiding gun owners will rightly see his actions as an assault on their freedoms.

In the statement, the administration also renewed their call for banning so-called “assault weapons,” which is a made-up term that refers to semi-automatic long guns.

Such guns essentially function the same way as pistols, meaning that a shot is fired every time the trigger is pulled.

However, pro-Second Amendment advocates say the move is a blatant attempt to bankrupt the gun industry.

Neon Nettle as a free independent news source created by people for people, not corporations, delivering alternative news as mainstream continues become less valid with its ongoing practices of censorship and bias narratives.
Next