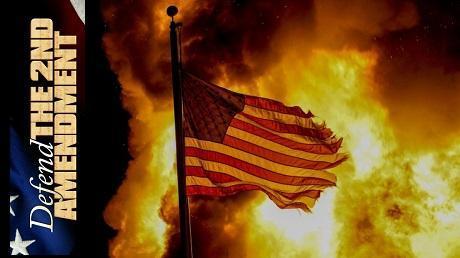 “That attempted murder of that citizen was wrong,” one young man geared up to defend property in Kenosha said of Jacob Blake, the black man shot on Sunday. “And I’m all for protest, but you can’t be destroying your neighbors’ houses and businesses.”

A black woman rioter yelled at him in response.

It’s amazing what surrounding a small business w/ a few good men strapped w/ powerful weapons can do to maintain peace@VenturaReport is on the groundpic.twitter.com/TxQbX6UNt4

“We’re trying to stop them from hurting their own community, man,” one of the armed citizens told Townhall’s Julio Rosas.

On the ground in Kenosha, WI for @townhallcom.

Currently surveying the damage after the riots that occurred in response to the police shooting of Jacob Blake. A lot of buildings are boarded up, including the Kenosha County Democratic Party building. pic.twitter.com/0HmfGaWaoN

These citizens put themselves in harm’s way to protect their neighbors’ homes and businesses from destructive rioters.

See all the videos in this link ►

“Rioters used umbrellas to advance towards the Kenosha County Courthouse to throw projectiles and fireworks, police then used less-than-lethal rounds to make them fall back,” Rosas tweeted. His videos showed the National Guard defending the courthouse.

Police used tear gas to break up the mob.

Police outside the Kenosha County Courthouse continue to fire less-than-lethal ordinance as rioters throw projectiles at them. pic.twitter.com/YhaMPxuoSG

Later, the mob went from business to business, breaking in and looting. Rioters broke into and looted Budget Motors.

"Budget Motors" in #Kenosha is being vandalized by mob. Mutiple people breaking and entering. #Wisconsin pic.twitter.com/dNtAKwx1zp

Rioters broke into Boost Mobile. According to a video captured by Brendan Gutenschwager, a woman triumphantly shouted, “I got the phone cases!” as she exited the looted business.

“I got the phone cases!” A woman cheers as Boost Mobile is looted in Kenosha tonight #Kenosha #KenoshaRiot #KenoshaWi pic.twitter.com/OGH9tH0ZQy

Rioters use baseball bats to smash street lights & crosswalk signals through downtown as the crowd moved away from the courthouse #Kenosha #KenoshaRiots #KenoshaProtests pic.twitter.com/mGlbvHomjd

Rioters set cars on fire. Blaze TV’s Elijah Schaffer estimated that at least 40 cars had been destroyed on one city block alone.

KENOSHA: The city is burning tonight as dozens of cars have been engulfed in flames after being targeted by #BLM arsonists

This is only one city block, but there were many other vehicles around the city completely destroyed

More than 40 at the very least pic.twitter.com/kJ6qCCqlUf

Schaffer shared before and after photos of B&L Office Furniture, one of the small businesses torched in the riots.

This is B&L Office Furniture in Kenosha, Wisconsin

before & after the #BLM riots on Monday night

This is a small business

a place where people work

Sitting on a property somebody invested in

This is real America

All destroyed by heartless criminals pic.twitter.com/XCFhASw6it

A fire at a mattress store reportedly spread to a bodega and a Mexican restaurant.

Neighbors say that they saw people setting fire to a mattress store. It appears to have spread to a bodega and Mexican restaurant, possibly more.

One of the rioters pointed a pistol in Shaffer’s face as he recorded the riots on the ground.

HOLY SH*#: while interviewing this #BLM rioter in Kinosha he pulls out a real pistol and points it at my camera while explaining what we would do to cops if they rolled up on us right now

It’s been a while since I had a gun pointed at me even if it was just to make a point pic.twitter.com/hjQqO9Ccbb

Some citizens tried to explain to the rioters that “people have their lives in these businesses,” but the rioters would not listen. “A furniture store is the police? A dealership is the police?” a local man asked. “We’ll burn your shop down, too!” the rioters shouted as he drove away.

The rioters left a post-apocalyptic hellscape in their wake.

SWAT teams and tactical units arrive to try to get the situation under control #KenoshaRiots #Kenosha #Kenoshapolice pic.twitter.com/HmhbVbr37m

Gov. Tony Evers (D-Wisc.) addressed the shooting of Jacob Blake in a press conference on Monday, championing the Black Lives Matter movement and police reform but refusing to condemn the violent riots.

He did manage to fit in a dig at “Republican leadership” in the state legislature, calling for a special session to pass police reform legislation. “This is not the time for politics,” he added after condemning Republicans. “We must rise to this movement and this moment [with] a fierce commitment to disrupt the cycle of systemic racism and bias.”

“We also stand against excessive use of force and immediate escalation when engaging with black Wisconsinites,” the governor said. “We are all reminded that racism is a public health crisis.”

He did address protesters directly at one point, saying that if Wisconsinites decide to protest, “please do so peacefully, and please wear your masks and keep social distance as best you can.”

It is despicable that Evers did not once condemn the destructive and violent riots that left Kenosha burning on Sunday night. It seems unlikely he will denounce the riots on Monday night, either.